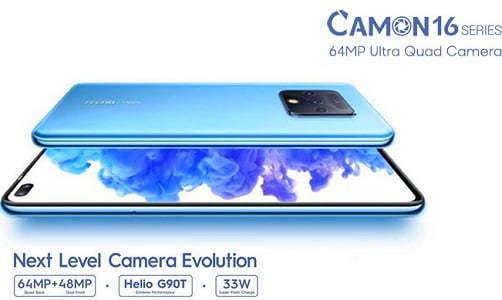 Tecno is producing a technology that was initially deployed by leading smartphone marker OnePlus, that is adopting the AR launch approach which was deployed by OnePlus for the Nord launch recently Source Gizmochina.com .

According to another source, Gadgets.ndtv its no more news that the Tecno Smartphone Camon 16 series will be the direct successor of the Camon 15 series made up of the Camon 15 Pro and Camon 15, both of which were introduced in early this year.

The rumour has it that he Tecno smartphone Camon 16 will be rendering some couple of teaser posters which shows the frontage of the device. The Tecno device was said to packs a fullscreen design with ultra-thin bezels at the chin.

The phone comes with a dual punch-hole design located at the top left corner of the display just like newly launched Infinix Zero 8 with 128GB and 8GB RAM memory. The device will pack a 48MP selfie camera but the second sensor is not known yet.

All the Latest Tecno Smartphones and Prices Review on Kinfoarena

At the rear, the Tecno Camon 16 will adopt a Quad-camera setup which Tecno says will be of flagship level. The main camera is a 64MP sensor which is higher than the 48MP main sensor on its predecessor.

The Good news for Asia and the African continent is that the Tecno smartphone may likely be available in Tecno’s key markets such as Nigeria, India, Pakistan etc.

The flagship Tecno smartphone was also rumoured to come with a 6.9-inch dual dot-in display. It packs a 48-megapixel dual front camera, also comes with an ultra-wide-angle selfie camera.

The Tecno Camon 16, being a camera-centric phone, is also likely to feature an ultra night portrait mode and a super video mode. It is also expected that the phone will come with decent slow-motion capabilities. Also known as the fact that it will feature support for 33W fast charging technology. The battery capacity, however, its battery is said to be 4000mAh.